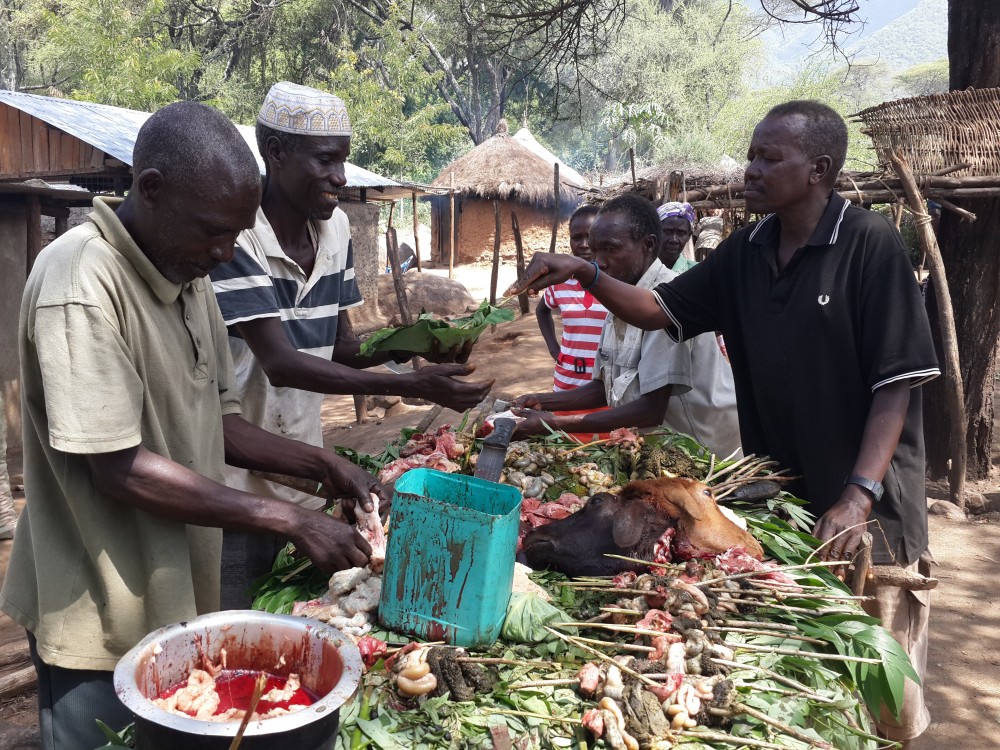 Tugen, Pokot, and Pokot engaging in trade at the Kilos Market as peace resumes in a previously cattle rustling hot spot

Kilos market in Elgeiyo Marakwet County in Kenya was once ghost center and bloodshed was the order of the day as warring communities of Tugen, Pokot and Marakwet were embroiled in cattle rustling that left in its wake death, while the survivors were maimed.


The only livestock that walked the dusty roads were those that had been stolen from one of the significant communities in the area.

Gun shots were a common occurrence but now all that is replaced by the sweet sounds of the chirping birds and the occasional laughs of market goers.

The bloodshed nowadays is from the sheep and goats that are being slaughtered by businessmen as they prepare lunch for traders at the now lively Kilos market in Elgeiyo-Marakwet County.

An outstanding feature about the market is the use of barter trade to conduct business, where milk, maize, tobacco can be exchanged for meat and other goods.

There are no weighing scales thus approximation is applied as goods are exchanged among traders from the communities residing in the area.

“We have been brought up knowing that this is the kind of trade that goes on in this area but the clashes brought businesses to a standstill,” said David Keino.

As I interview Keino the market’s chairman, a middle-aged woman walks to where the meat stall is and offers milk packaged in a clear paper bag, after a negotiation she hands over the milk and meat wrapped in arrowroot leaves is given to her.

However, Mr Keino notes, for those that have hard cash could use it but since there is no weighing scale, they have to make do with what is given to them.

Nothing goes to waste, not even the blood after the slaughter of the animals, the blood is tapped and is used to make ‘mutura’ which is sold to the market goers.

The trading center that is at the heart of the border between the Keiyos, Marakwet, Tugen and the Pokot had been a battle ground that saw the loss of lives and livelihoods for the pastoralist communities.

Cattle rustling had been the order of the day, until the government saw it necessary to enlist the services of Kenya Police Reservists (now known as National Police Reservists) after leaders from the region called for peace and reconciliation.

Now the market, which is held on Tuesdays, is uniting the communities that were once sworn enemies.
The women prepare traditional meals comprising millet ugali and ‘mursik’ (sour milk) as the men roast meat, liver, lungs, ‘mutura’ and heart over an open fire.

Traditional herbalists too bring a wide variety of medicinal herbs in bundles for trade.
Philemon Cherop explains that the communities have intermarried and now the issue of cattle rustling is a thing of the past.

“We are co-existing peacefully because we realized that we need each other so that our lives would be good,” he said.

Mr Cherop says the different communities had their unique qualities and products that have ensured that they unite to reap maximum benefits from what they have.

“The Keiyos and Marakwets have farms on the highlands thus they produce vegetables, a lot of milk and cereals whereas those living on the valley have honey, green grams, meat and skins that we can trade,” he said.

Mzee Kihara says contrary to common belief that weights and measures were the best suited to ensure accuracy and fair business, their traditional weighing approach has never caused any disagreements.
He added that they had heard of conflicts arising from weights and measurements that had led to the loss of life.

“There was I time I heard on the radio that two brothers had fought and one lost his life after the two siblings fought over whose half kilo of meat was bigger,” Mr Kihara said.
Kilos market had been shut down from 1998 and was only opened in 2003 after a new government took over after the 2002 General Election.

Former Marakwet West MP Linah Kilimo sensitized the communities on the importance of peace which persuaded the warring communities to surrender illegal arms and co-exist harmoniously.
Kilos has in the recent past experienced an influx of business people from outside the region bringing their wares to be traded at the market.