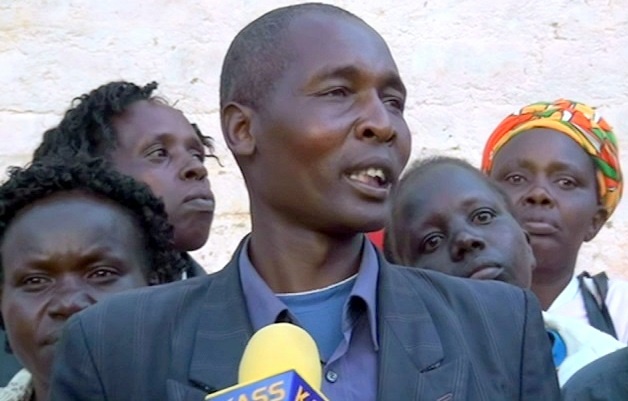 Stephen Rotich the Director Boresha Maisha na Mazingira self help group speaking during the launch of the group. Picture by Wilson Rotich.

Kenyans welcomed the 2010 Constitution with their eyes peeled on devolved development, but five years on, women and other vulnerable groups are still left to their own devices. Thanks to self-help groups that selflessly come in handy to assist them.


Sarah Taprandich is alarmingly aging though she can still fetch water from down the stream. She has walked up and down this sloppy, slippery path for the last six decades, not as a physical exercise but because she has no option.

Politicians of all ages, shapes and gender have often intercepted her trips to the water source, all promising to pull piped, clean water to her doorstep only if she votes for them. But her journey to the river has increasingly weakened her shaky hands and bowing backbone.

She has perpetually been calling on both the county and national governments to implement water projects in her village of Kiborokwo in Soy Constituency, Uasin Gishu County, but to no avail.
“I have been assisting school pupils with my water containers because I live close to the school. However, some have not been returning my containers. I have lost a lot of them. They have not respected my age. May be because they are young then they forget to bring them back to me,” she says.

Taprandich is now turning her hopes to the Boresha Maisha na Mazingira self-help group that seeks to help vulnerable families get education, health and environmental assistance in this village that is prone to landslides during heavy downpour. She hopes the El Niño rains would worsen her already bad sunset years.

Rosa Lemiso is a resident of Kiborokwo and a member of the self-help group. She says the group has greatly improved their lives.

“Sometimes when the students we are assisting through this project have not paid their school fees, our director Stephen Rotich always negotiates on our behalf so that our children can continue with their studies without undue interruptions,” she says.

For the couple of years that this group has existed, it has been helping not only students but also anybody who has health problems or even expectant and lactating mothers. Most of them are peasant farmers. They face a myriad of challenges including poor road networks. They cannot transport their produce to the market in good time. They hope the government would to help them solve the problems.

Marsela Mutai, a resident of Kiborokwo and one of the active officials of the Boresha Maisha group, says they give priority to orphans, widows, single parents and most needy community members.

Mr Rotich is the head and founder of the Boresha Maisha holds high the vision of the group which is to ensure that every family in their community should have at least one university graduate.

“This is because education is key to development. So far we have assisted over 16 students in various secondary schools. We do thank the county government, our MP Barchilei and the national government for the bursary allocations that have seen our children through high school,” he says.

Rotich challenged parents in his community to set aside resources to educate their children.
“An educated person works with one hand while an illiterate person works with two hands, quite harder to succeed,” says Mr Rotich.

The self-help group was formed by former alcoholics who pooled their resources, ideas and time to help one another overcome alcohol addiction. Together they were able to do far much more than what the best doctors could do.

Article 43(d) of the fourth chapter in the Constitution clearly spells out that every person has the right to clean and safe water in adequate quantities. However, in most households in Kenya, women still bear the responsibility of looking for water, in some cases over long distances. They have resorted to the helper-therapy principle through self-help groups.

The helper-therapy principle, which was coined by Riessman (1965), holds that people who are suffering from their own difficulties find that their painful experiences can help others in the same boat or those in similar circumstances.

Rotich is a trained and experienced primary school teacher. He rose through the ranks and retired as a head teacher of several schools in his neighborhood and beyond. He is now a board member of one of the institutions he once headed, thanks to his impressive track record.

Today, he is clad in a designer fitting blue stripped suit that befits his position in the society. However, his agility would portray him as a newly recruited teacher. But his speech exudes endless nuggets of wisdom which he has accumulated over the years in his teaching profession. He has just welcomed guests to witness the launch of the self-help group. Among them is the local member of the county assembly, Segero-Barsombe Ward Obadia Kipleting Kosgei.

The MCA promised to pump clean water to the primary school and to the neighboring homesteads. He also pledged to merge several self-help groups in his ward in a bid to get a bigger group that can attract funds from the county government for projects such as environment, health and education. But before such promises are brought to fruition, the women at Kiborokwo village in the ward are devising their own ways of fending for their families with the assistance of the self-help groups.