A Female Farmer Who Has Received State Accolades Kogo Sarah Saina is narrating her success story outside her home at Kabiyet, Nandi County. Picture by Wilson Rotich.

As a great number of celebrated large and small-scale farmers are aging away, the future of food security in the country is becoming uncertain.

The honeymoon bed of Kogo Sarah Saina could have been an elevated mud floor, which was covered with a cow hide whose colour and fur had weathered away with time, but she farmed her way to fame. She was decorated with the Head of State Commendation award by the second president of Kenya, Daniel Moi and the third president Mwai Kibaki for her exemplary work in large-scale farming.

Kogo Sarah Saina calls on the younger generation to work hard and smart in wealth creation. She advises the young men and women to venture into other business activities in addition so as to improve the viability of farming which has been greatly affected given that land has been so much subdivided.

MAIN STORY:
As a great number of celebrated large and small-scale farmers age away, the future of food security in the country is becoming quite uncertain. Farming may not be attractive to young people, but Kogo Sarah Saina farmed her way to fame.

According to the International Institute for Environment and Development, half of the farmers in the United States of America are older than 55 years while in Sub-Saharan Africa the average age of farmers is 60. The youth who are increasingly becoming jobless rarely knock the open doors of farming oblivious of the fact that agriculture can provide intellectually stimulating and economically sustainable careers.

Sara Saina’s honeymoon bed was an elevated mud floor, which was covered with a cowhide whose colour and fur had weathered away with time.

Four decades later, she was decorated with the Head of State Commendation award by the second president of Kenya, Daniel Arap Moi, for her noticeable work in large-scale farming. In December, 2007 she received another commendation from the third head of state, President Mwai Kibaki. This award is quite competitive and is offered after some thorough vetting process. There has to be evidence beyond reasonable doubt that the farmer is contributing immensely to the food basket of the country. It is most envied by most successful business persons and entrepreneurs. 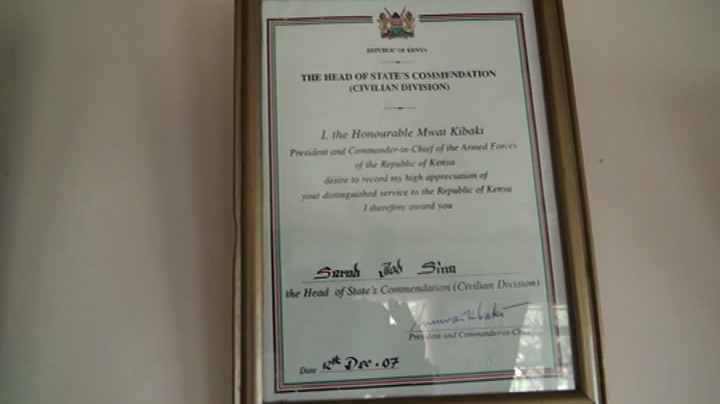 The Head of State Commendation Award that was given to Kogo Sarah Saina by President Mwai Kibaki in December 2007. This award is quite competitive and is offered after some evidence beyond reasonable doubt that the farmer is contributing immensely to the food basket of the country. Picture by Wilson Rotich.

However, informed by her humble beginnings, Kogo Saina said that the awards always came to her as a surprise. “My driving force has always been to provide for my family and to get surplus to sell to those who do not have land to cultivate,” she said happily.

She was born in Kapkole in Aldai location in Nandi County. At 12, she assisted her grandmother in her business of selling Tobacco. “I even planted a few Tobacco bushes for myself. I wore skins by then but at 13, I followed those who had cloths to Kapsabet town where I bought my first cloth. I met white missionaries in Kapsabet who took me to school.” She recalls.

Her illiterate parents were not quite comfortable with formal education. They thought they were losing their daughter to the colonial government. “I did classes for only 2 years. My parents took me back home, but I went back to the missionaries. They trained me to do house cleaning, ironing cloths. I was sent to preach to the Talai people who were then detained at Gwassi in Lambwe Valley in Nyanza,” Sarah narrates.

At 14, her parents succeeded in giving her off for marriage as a second wife to a man in Kabiyet in Nandi County. “I obliged. I loved the man but he had no wealth. He had cows that were feasting around like donkeys. With tiny udders, the cows provided no milk at all. We did not have a bed. I improvised a mattress by using grass stuffed in sacks. I lived in a grass thatched hut,” Sarah says.

She started small in body, ideas and even age but now at 85, she has grown in stature, experience and weighs more. Nonetheless, Kogo Saina can still make minimal visits to her vast farm to superintend her commercial activities. She now lives in her modern two-storey house in Eldoret town, Uasin Gishu County. Both her houses in the village and in Eldoret town are fully furnished with digital flat-screen television sets and state of the art leisure-seats.

She advises young ladies to embrace farming positively. “I often wonder why young people especially girls think that agriculture is not cool. I was able to shake hands and dine with two heads of state and a British administrator just because of my efforts in the farm,” she said with a smile lingering on her healthy and glowing cheeks that seem to contradict the fact that she is aging.

Rael Cherono Saina, 60, is one of the daughters of Sarah Saina. She is a successful businesswoman in Eldoret town. “I congratulate my mother for giving me the proper support during my formative years. I learnt everything I do from my mum.” 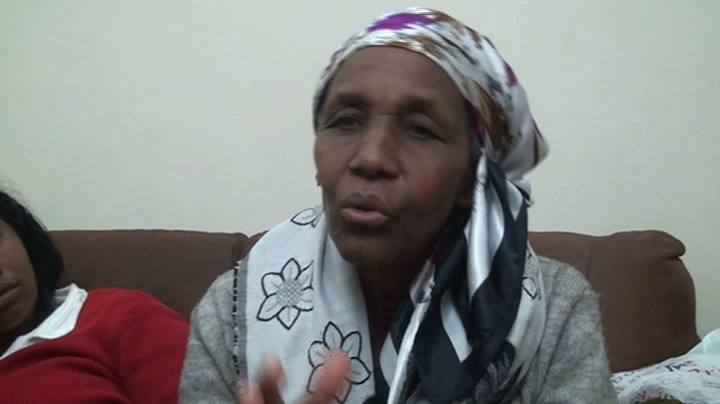 Rael Cherono Saina, is one of the daughters of Sarah Saina. She is a successful businesswoman in Eldoret town. Picture by Wilson Rotich.

Hellen Jepchirchir is the tenth daughter of Kogo Saina, she is proud of her mother saying she never lacked anything in her life as she grew up. “My mum was always hard working. She provided for all my needs. Although we are quite a big number, our mum gave each one of us the necessary attention that we needed,” she revealed. 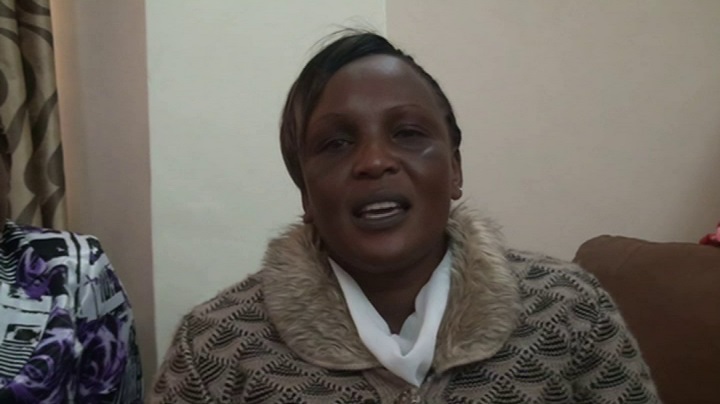 Hellen Jepchirchir is the tenth daughter of Kogo Saina, she is proud of her mother saying she never lacked anything in her life as she grew up. Picture by Wilson Rotich

She does not forget where she began and she has a wealth of advice for young upcoming farmers. “I started with one egg that hatched a chick. The chick multiplied to very many hens and from the proceeds I got from selling them, I was able to buy two cows in 1953. A European veterinary extension officer introduced me to Artificial Insemination (AI) services. The breed of my cows improved since then. I started drinking milk and had surplus to sell,” she says as she leans on her walking stick.

While working for the missionaries, she developed the ambition to live above poverty levels. This gave her an innovative mind. “I have tried all businesses known to me except local beer brewing. I chose to deal with purely clean deals. I did maize trade. Later, I traded in second hand clothes. In 1955 I tried my hand on tailoring. I bought 5 tailoring machines and employed 5 young men from our neighbouring ethnic community,” she testifies. 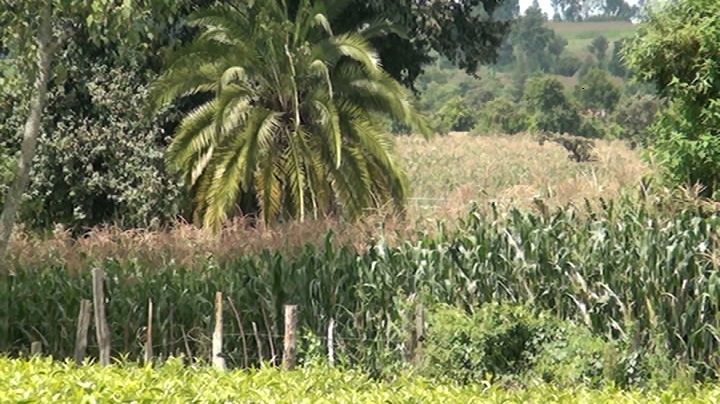 This is part of a maize plantation that Kogo Sarah Saina still cultivates at her home in Kabiyet, Nandi County. She advises the youth that farming is as cool as any other profitable enterprise. Picture by Wilson Rotich.

Kogo Saina says her rule of thumb in farming is crop rotation and diversification of businesses. “Whenever I realize that more people have copied my business I immediately shift to something else to avoid saturating the market with one product.” She reveals while reclining on her sofa seat beside her smart television.

She recalls attending several agricultural workshops, which were beneficial to her despite her illiteracy. “I might not have heard what they said in the workshops but they illustrated a lot practically. So I practised what I saw them doing,” She enthused.

Sarah says a visit to the farm of the retired president Moi in Kabarak inspired her to work hard in her farm. “I was motivated to see the head of state, who despite being in a position to buy anything he needs, still finds it important to keep a farm of good crops and livestock,” she said.

The mother of 13 children and several grand children proudly dismisses the idea of giving birth to just a couple of children in the name of family planning. “I gave birth to 13 children and none of them went hungry. Even when my husband passed away I was able to educate them all. My secret was nothing more than farming. I do not understand why a successful farmer should limit themselves to only two children,” Saina added.

She says she has been a consistent dairy farmer since 1953 and was among the founder members of the Kenya Cooperative Creameries (KCC). “I was among the first Africans to join the KCC. It was formerly called the Great Rift and it was owned by the white settlers. I was member number 320.”

She claims that she was in the forefront sensitising upcoming farmers on the importance of the cooperative societies. “I rode a bicycle visiting farmers in Nandi and Uasin Gishu Counties. Every dairy farmer was required to donate ‘capital levy’ which was for the development of the KCC Company in the entire north and south Rift regions. When I hear some government officials claiming that they want farmers to buy shares in the New KCC, I get irritated because KCC belongs to all farmers who participated in establishing it,” she said without blinking.

“I want the leaders to realize that I do have a share certificate. I used to receive dividends from the Kenya Commercial Bank. So why is the government telling us to buy shares from the New KCC. Whom are we buying it from? KCC is ours. It belongs to all the farmers in the entire region,” she added.

The former Kenya Co-operative Creameries limited was created as a cooperative society owned by dairy farmers. However, due to mismanagement the organisation incurred huge debts from the Kenya Commercial Bank (KCB), which placed it under receivership and later revived it under the name New KCC although it is still struggling with cash flow problems.

“Populations have exploded and yet land remains the same. I challenge the youth to tour developed countries and learn from them. Knowledge and disobedience have considerably increased in this generation. I call on the youth to embrace discipline”, says Kogo Saina.

Kogo Saina challenges the youth to explore the new trends of agriculture saying her ways of doing things might have been overtaken by events but better ways have come up. “Some of you young people can pursue urban agricultural activities, environmental sciences, biodynamic farming, quality assurance in agriculture produce, as well as agricultural engineering,” she advised. 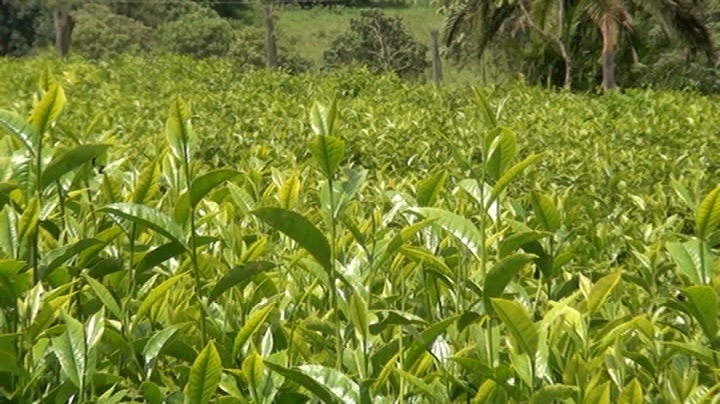 This is part of a maize plantation that Kogo Sarah Saina still cultivates at her home in Kabiyet, Nandi County. She advises the youth that farming is as cool as any other profitable enterprise. Picture by Wilson Rotich.

The decorated farmer said the devolved government has the challenge of redressing economic, regional imbalance. “These county governments have an uphill task to adorn agriculture and related works to be more appealing by changing public perception. Relevant industries should be built in all counties to expedite equitable development opportunities to all regions.”


While the legs and arms of Kogo Sarah Saina are getting more frail each passing day as many more large and small scale farmers are aging away, the begging question is: Where does this leave the future of food security in the country?